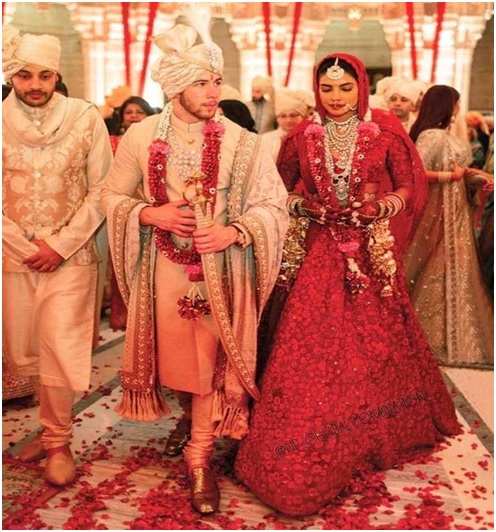 "A happy marriage is a long conversation which always seems too short."

An interesting fact is an Australian start-up company; Join My Wedding is giving foreign travellers, the chance to be a guest in Indian Weddings.

Indian weddings are not just for the Indians but its attracting foreigners as well. LA-based photographer Taylor Jones, Who had a dream wedding in India confessed that his search for the perfect wedding ended when he, watched it on television. The colours and rituals especially the mantra recitation and (phere) roaming around the fire seven times was his favourite.

Indian weddings attract foreigners because they are inclusive of family and friends. Rituals like Mehandi, Haldi and sangeet ceremony are new to them.

Further on the planner went on revelling that number of international tourists coming to India for ceremonies has increased compared to the last three years.

What attracts international tourist?
Another wedding planner Mayur Kathuria said that venues are the primary attraction.

"The royal aura of Indian Palaces, with the bride walking the aisle like a maharani (Indian Queen) is what they want in their weddings. A, it makes for a perfect photo-shoot and B, it creates a memory for a lifetime."

Mehendi
It's a traditional ceremony that takes place before the wedding. A henna artist designs the to-be-brides' hand and feet for her wedding day. It adds on to the charm and beauty of the bride on her wedding day.

Haldi ceremony
It's a ceremony that takes place for both the groom and the bride. It's performed before the wedding. Haldi, known as turmeric adhesive; applied on the hands and face of the to-be-bride and groom. This ceremony is regarded as essential because it is presumed to make the faces glow of the couple.

Sangeet
Sangeet ceremony is loved by most of them because it tends to spread happiness. Most of the time it is kept at nighttime before the day of marriage. The relatives and friends in this ceremony perform cultural dances and songs for the couple. Overall the atmosphere becomes the one like a traditional party.

The wedding ritual
Most of the traditional Indian weddings are incomplete without pheras. The pheras are performed with the recitation of mantras by a pandit. And couple circling the yagna kund (the firepot) for seven times. Promising, togetherness for the upcoming seven births.

Lastly, Big Fat Indian weddings are enjoyed by foreigners because of the varieties of traditional costumes and various Indian cuisines served at weddings.